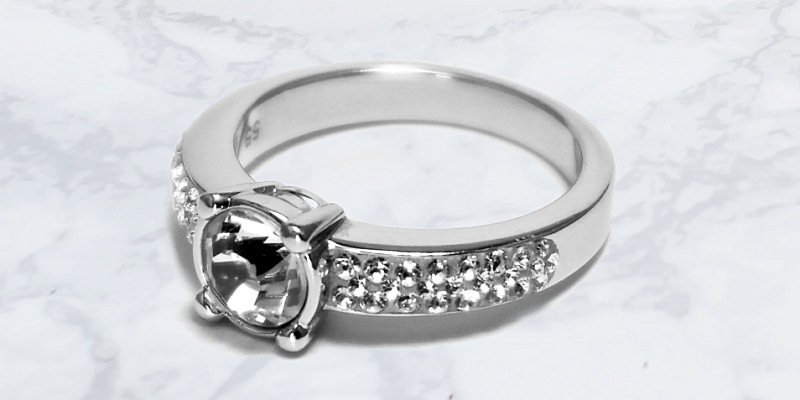 In Western tradition, an engagement ring is a ring worn by a person indicating his or her engagement to be married. Conventionally, the ring is presented as a betrothal gift by a man to his prospective bride while he proposes marriage or directly after she accepts his marriage proposal. It represents a formal agreement to future marriage.

In some countries, such as the United States and the United Kingdom, it is worn on the left-hand ring finger, while in other countries, such as Poland and Ukraine, it is customary for the ring to be worn on the right-hand. Similar traditions purportedly date to classical times, dating back from an early usage reportedly referring to the fourth finger of the left hand as containing the vena amoris or “vein of love”.

Most engagement rings, like any other kind of jewellery, can be classified according to their style. Since the middle of the 20th century, diamonds have widely featured in engagement rings. Solitaire rings have one single diamond. These traditional engagement rings may have different prong settings and bands. Another major category is engagement rings with side stones. Rings with a larger diamond set in the middle and smaller diamonds on the side fit under this category. Three-stone diamond engagement rings, sometimes called trinity rings or trilogy rings, are rings with three matching diamonds set horizontally in a row with the bigger stone in the center. The three diamonds on the ring are typically said to represent the couple’s past, present, and future, but other people give religious significance to the arrangement.

A wedding set, or bridal set, includes an engagement ring and a wedding band that match as a set. In some cases, the engagement ring looks “incomplete”; it is only when the two halves are assembled that the ring looks whole. In other cases, a wedding set consists of two rings that match stylistically and are worn stacked, although either piece would look appropriate as a separate ring. Although the wedding band is not to be worn until the wedding day, the two rings are usually sold together as a wedding set. After the wedding, the bride may choose to have the two pieces welded together, to increase convenience and reduce the likelihood of losing one ring. A trio ring set includes a ladies engagement ring, ladies wedding band and a men’s wedding band. These sets often have matching rings and are lower in price.

In some countries (but not most of the Western world), both men and women wear engagement rings. Both rings are often in the form of a plain band of a precious metal, however, modern “Alternative Metals” such as Stainless Steel, Tungsten Carbide, and Titanium are now being widely used. Often, the engagement ring eventually serves as the wedding ring for the man. In other cultures, the future bride may prefer to buy a wristwatch for her future husband as an engagement present. This is more common if she proposed marriage to him.

Engagement Rings was last modified: May 17th, 2018 by admin