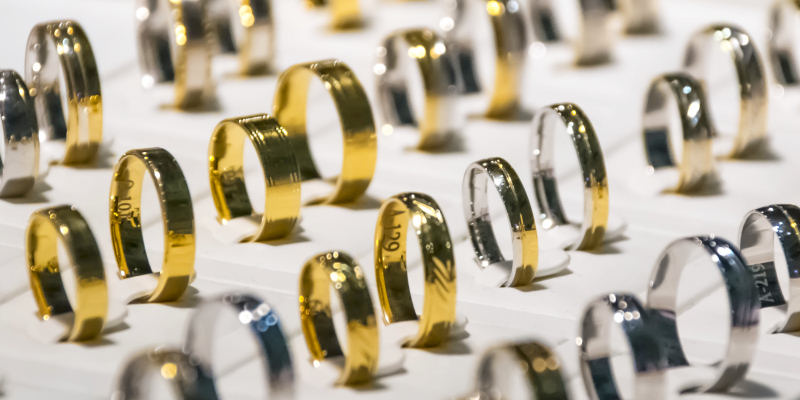 A finger ring is a circular band worn as a type of ornamental jewellery around a finger; it is the most common current meaning of the word ring. Other types of metal bands worn as ornaments are also called rings, such as arm rings and neck rings.
Rings are worn by both men and women and can be of any quality. Rings can be made of metal, plastic, wood, bone, glass, gemstone and other materials. They may be set with a “stone” of some sort, which is often a precious or semi-precious gemstone such as ruby, sapphire or emerald, but can also be of almost any material.

Various ring shapes and styles exist. The following are but a few.

Aqiq ring
A carnelian or Agate ring worn by some Muslims, especially Shi’ah, in imitation of Muhammad and the twelve Imams.
Championship ring
A ring presented to members of winning teams in professional business leagues as well as college tournaments in North America.
Claddagh ring
An Irish friendship ring. It is traditionally used to indicate the state of romantic availability.
Class ring
Worn by students and alumni in commemoration of their graduation.
Dinner ring
An oversized ring, set with non-precious or semiprecious stones.
Eclarian ring
A ring worn by gay men to represent their beliefs. This ring has a separate centre which rotates.
Engagement ring
A traditional ring worn by a woman to indicate her engagement to be married.
Engineer’s Ring, Iron Ring
A ring worn by engineers on the pinky finger of their working hand to remind them of their ethical obligations.
Eternity ring
A ring symbolizing eternity with a partner.
Finger armor ring
Typically it spans from the base of the finger to just below the nail or middle of the second joint and includes a bending joint.
Friendship ring
Friendship rings are used to symbolize a close relationship that has no romantic undertone.
Gimmal ring
Ring made of 2 or 3 linking hoops, popular for betrothals in 16th and 17th century Europe
Magic ring
A fictitious ornament that appears frequently in fantasy stories and fairy tales.
Mood ring
A novelty ring which changes color in response to body temperature, using a thermochromic liquid crystal.
Mother’s ring
A ring worn by a mother displaying the birthstone of each of her children, and sometimes including those of the mother and father.
Mourning ring
A ring worn in memory of someone who has died.
Multi-Finger ring
Two or more conjoined rings, designed to be worn across two, three, or four fingers; popularized by hip-hop culture.
Pinky ring
A ring worn on the pinky finger.
Posie ring
A ring with a short inscription on its outer surface.
Pre-engagement ring
A small, inexpensive ring given to a partner, to promise not to court a rival.
Promise ring
A ring worn to remind oneself of a promise one has made.
Purity ring
A symbol of virginity in some religious cultures.
Puzzle ring
Interlocking rings forming a single band; difficult to reassemble if removed from the finger.
Poison ring or Pillbox ring
A Ring consisting of a pillbox fitted into the ring, either for keeping medication or poison.
Regards ring
A Victorian engagement ring with an implicit acrostic: Ruby, Emerald, Garnet, Amethyst, Ruby, Diamond, Sapphire.
Ring of O
A ring inspired by the Story of O, Pauline Reage’s novel, in which the heroine, “The O” is presented with such a ring as a symbol of her submission.
Rosary ring
A rosary ring is a ring worn around the finger with 10 indentations and a cross on the surface, representing one decade of a rosary. The rings are used to keep track of place in the prayer by rotating the ring on a finger and feeling the marks.
Signet ring
An emblematic, often familial, ring, often bearing a coat of arms, fit for use to imprint a wax seal on documents etc.
Sovereign ring
A typically large, gold ring, set with a gold sovereign as its decorative feature.
Thumb ring
This largest of finger rings is worn on the thumb primarily for fashion, but is also worn as a symbol of will power or internal energy, sexuality, and other beliefs or attitudes.
Watch ring
A small analogue or digital watch to be worn around a finger.
Wedding ring
A ring presented in many marriage ceremonies to signify marital commitment. Originally worn only by the woman, it is now common for both spouses to wear such a ring.