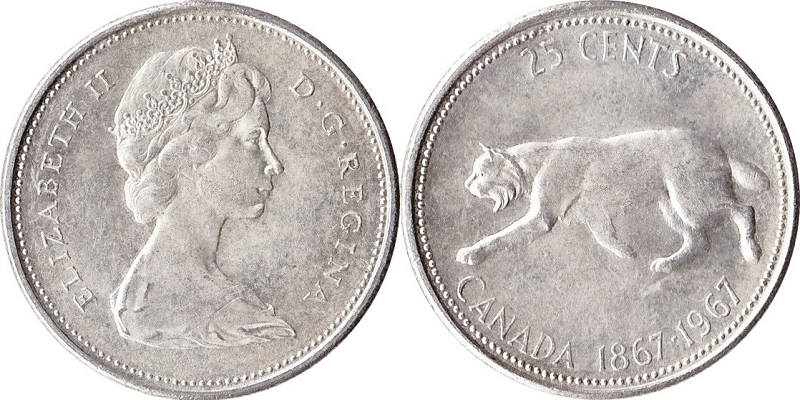 We at True North Gold Buyer Ltd., the gold, silver & platinum buyer of your choice, offer you top prices for your old or unwanted coins. Below you will find further information on silver containing coins of the Canadian Dollar we buy. If you cannot find your coin below or have a coin that you cannot identify please write us an email via our Contact Form or call us at (705) 302 1055 to obtain an estimate. Please keep in mind that we may not be able to provide you with an accurate estimate until we have seen the coin. We will gladly buy any other silver coin or precious metal bullion you may wish to sell.

In the table below you will find a list of coins of the Canadian Dollar that contain silver. It is is a summary of important information of the History section.

Beginning in 1858, the Province of Canada began issuing decimal coins, based on the value of the American dollar, due to an influx of American silver; by 1870, the rest of Canada (including Newfoundland, not yet a province) had followed.

Beginning in 1870, the penny disappeared (reappearing in 1876), the quarter supplanted the 20¢, and a 50¢ silver coin was added. The designs were standardized with the head of Queen Victoria on the obverse, value and date with a crowned maple wreath reverse (except the penny, which had a maple vine circlet). Edward VII supplanted Victoria on her death, followed by George V in 1911.

The cent became smaller in 1920, and in 1922, copying an earlier change in the United States, the 5¢ coin was enlarged and changed to nickel; unlike the United States, pure nickel was used except during World War II and the Korean War, due to nickel shortages. A silver dollar coin similar to that issued in the United States was first proposed in 1911 and a few trial pieces exist, but a proper dollar coin did not arrive until 1935, celebrating George V’s silver jubilee. It was retained with new coinages every year (except 1939-44) until 1967.

For 1937, on the ascension of George VI, all-new designs appeared, with the sovereign’s head on the obverse, which persist (changed only by the switch to Elizabeth II in 1953 and a new draped bust in 1965) to this day: the penny with two maple leaves, the 5¢ beaver, the 10¢ schooner (commonly believed to be Bluenose, she is in fact a composite), the quarter a caribou head, Canada’s coat of arms on the 50¢, and two voyageurs in a canoe on the $1. The percentage of silver in silver coins was reduced in 1920 from 92.5% to 80%, and to 50% in 1967, when production of dollar and half-dollar coins for circulation was stopped. In 1968, the dime and quarter changed to 50% silver, while in August, all were replaced by pure nickel ones of the same size or (in the case of the 50¢ and $1) nearly so. The rising price of nickel eventually forced the 5¢ coin (commonly called the “nickel”) to be changed to cupro-nickel in 1982.