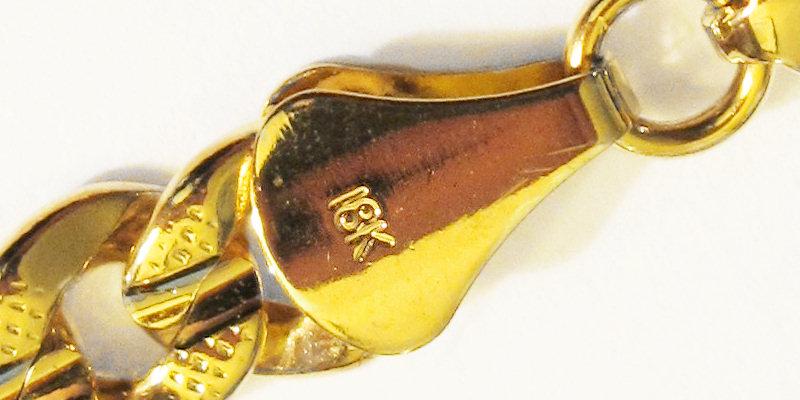 We were recently contacted by John, an older gentlemen from Saskatchewan. John was looking to sell two heavy necklaces and 2 heavy rings made from 18 kt “solid gold” to get some cash for car repairs. Based on the items’ “18 KT” gold hallmarks and the approximate weight he had given us, we estimated the payout for John’s jewellery to be a bit over $ 3000 which he was very happy with.
He mailed the items to us via Canada Post Xpresspost. Three days later we had them in our lab and started testing. 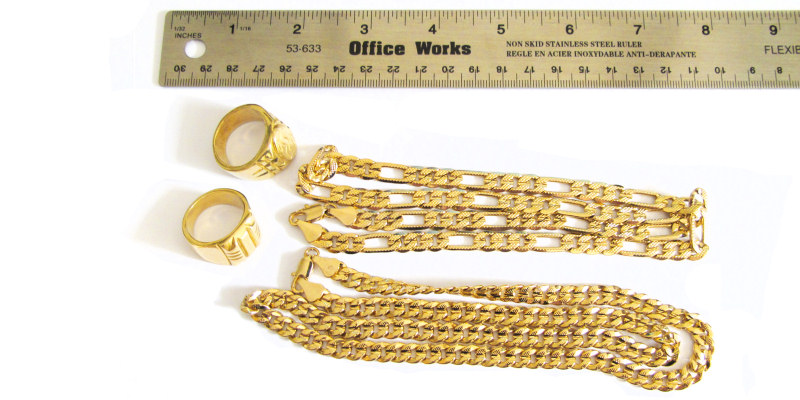 One of our employees had a brief look at them and at first glance, they looked like the real deal, since they all had clearly visible “18 KT” hallmarks on them. (see image gallery below)

Since our employees handle a lot of jewelry and other gold alloys on a regular basis he noticed that for the size of the items, they felt a little bit light, which made him suspicious. An average person without experience in this area definitely couldn’t have noticed it. As the next quick test, he held the jewelry close to a strong magnet. Aside from the springs in the clasps of the necklaces, nothing was magnetic. So far so good. He then weighed the pieces and altogether they weighed 111.14 g. (see image below)

Our employee moved on to testing them on our XRF spectrometer to determine their exact gold content. Unfortunately at that point it became apparent that they were all just plated fakes.

The XRF picked up the thin gold plating “Au 0.739 %”, plated on top of a layer of Nickel “Ni” to help with adhesion to the brass base material made of copper and zinc “Cu & Zn”. This clearly confirmed his earlier suspicion that these pieces were fakes. (see image above)

We called John to give him the bad news, and he was of course disappointed. We were curious as to how he had obtained those fakes and this is what he told us:

I was in front of my house in my driveway, putting new interior into my old car. A blue Hyundai with an East Indian family pulled into my driveway. Everybody in the car was upset and crying. A tall and very well dressed man got out of the passenger seat and told me that he desperately needed money to get his family to the airport in Calgary to catch a plane back to his home country. He showed me 2 rings and 2 necklaces with 18 kt stamps and offered to sell them to me in order to get the money they needed to get to the airport and catch their plane back home. I didn’t really want to buy them, so the man offered to throw in his 18 kt Rolex watch along with it to sweeten the deal. I asked how much he wanted for everything and the man replied that he wanted $ 1,500. I didn’t have that much cash on hand, but after a bit of back and forth and because the whole family in the car was crying and pleading, I felt bad for them and finally agreed to pay $ 1,000 for the two chains, the two rings and the rolex watch.

A few weeks later John needed to do some repairs on his car, and as he didn’t really have any use for the jewelry, he was looking to sell it and hopefully make a bit of a profit. So he found our website and sent the jewelry to us.

When John bought the jewelry from these guys, he told them that he was just a pensioner living on a small fixed income and didn’t have a lot of money himself.

We have to assume however that these scammers are professional career criminals and therefore do not care in the slightest about the people they defraud and steal money from.

Most “fake” costume jewelry is usually marked as such and the gold is plated onto a steel base, as that gives it higher mechanical strength and more durability when worn. So usually one can determine pretty quickly, either with the naked eye or with a magnet, whether one has a fake or not.
The pieces that the scammers sold to John however have obviously been manufactured with the sole intention to deceive and defraud people. They bear the “18 KT” hallmarks that would normally only be found on real pieces and the manufacturer has used brass as a base material to plate the gold onto to make sure one can not just “test” them with a magnet.

Given the “quality” of these fakes, we think it’s safe to assume that this family of scammers does this for a living. They tour small towns in rural areas and retirement communities, preying on caring elderly people who are willing to “help someone in need”, and until they are caught, they will likely steal several thousands of dollars a day with this scam from other Canadians.

Many might say that this story sounds like an obvious scam from the start, especially our younger readers. However, if you read this, please share it far and wide in order to make more people aware of these types of scams. This will make it more difficult for scammers to defraud others and also hopefully one day bring those guys to justice.

As for the fake jewelry, we have mailed the pieces back to John and he gave them to his grandkids to use for playing dress-up. At least that way they can get some use out of them even though at $ 1,000 these were very expensive toys.

The bottom line: Never buy any gold or silver jewelry, bars or coins from strangers off the street, especially when you have no way to test them first BEFORE you pay.

In order to help you avoid being scammed, we will show you in our next blog entry a simple way to test jewelry with a cup of water and a $ 30 scale to see if you have a real or a fake piece.